#Tuesdaymotivation #Dreams Do You Know #BillGates Has A Dream ?

Posted by Unknown at 1:29 AM No comments: Links to this post

SMILE AND LET US SEEZA TOGETHER

"If there are dreams about a beautiful South Africa, there are also roads that lead to their goal" Nelson Mandela

Annually I do my bit as an African who lives and loves South Africa, and one of such historic events I had the privilege to program directly was the launch of  "See South Africa (SEEZA)" a destination management network that officially launched late 2017 however ready to transform tourism in South Africa as a force through the unity of black tourism companies held at State Theatre , Pretoria, Tshwane, South Africa.

All lands should be perceived from a balanced view which is what "Seeza" stands and will live to represent as no car rides on a tire, neither does a stool or table stand on one leg. Life is sweet when and where there is a balance -every race should be free to take its place and pride in purpose bringing colour to the environment through its uniqueness and flavour.

As someone who loved South Africa from afar, now one who lives and loves living in love with this beautiful rainbow nation I am pleased to be a part of openings, stories, starts in South Africa and for Africa. In the words of Nelson Mandela: "If there are dreams about a beautiful South Africa, there are also roads that lead to that goal".

As I write this South Africa is set to host the world at the annual " Meetings Africa 2018" where we will hopefully have the world represented in our Rainbow Nation which is the world in one country, hopefully, it will walk us into one beautiful "bonday"  to tremendous show of friendships, networking to win and work towards a more united Africa for the greater good of all.

Posted by Unknown at 5:20 AM No comments: Links to this post

Nigeria is the land of my birth an #African nation that has a population of over 190 Million people,out of which approximately 1-2Million #live, #love or love&continue to live in #SouthAfrica a country that found me fit to honor me for honoring #Mandela around his last birthday 95th through it’s Speaker of #Council (Cityof Ekurhuleni ) declaring me an ‘honorary citizen’.   The privilege to have receive 2 #US #Awards (#Premier #Experts #Award) & #SecrettoWinningBig (Co-Authorship #Book #Award),the #Goodspirit #Award after successful participation and completion of #UCTGSB #3PeaksChallenge ,not to mention privilege and honor to be part of the distinguished global #Leadership #Team at #GujaratTechUniv... Undoubtedly It truly feels good to have recently received a nomination as “MOST #INSPIRING #NIGERIAN #PERSONALITY!" which I celebrate the nomination as it means a lot to me purely because it resonates with my #assignment and life #purpose which I found over 25 yrs ago. Yearly,Monthly,Weekly &Daily I Get Up #Passionately to love our my #LifeMission : “Inspire and Inform Individuals,(People and Professionals) so they can get involved in their life dreams and destiny " #Discovered Your #Mission #Purpose?It should be clear that it speaks for itself
( Agree?) Who or What  Inspires You? 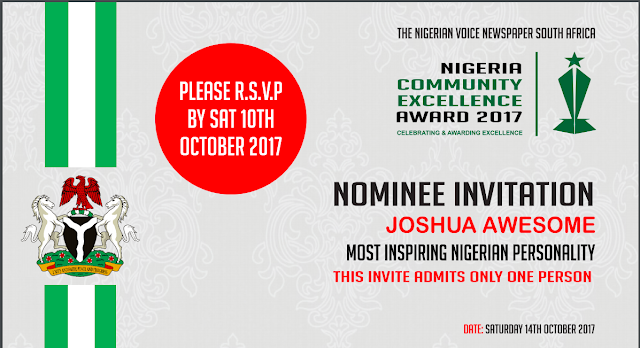 Posted by Unknown at 1:17 AM No comments: Links to this post 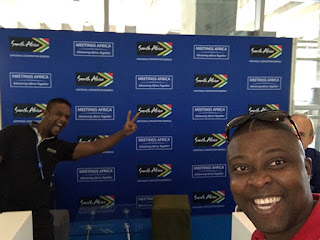 It's a greatday! Getting to OR Tambo International Airport from another trip and discovered the ever energetic and receptive #MeetingsAfrica17 Stand which is an annual tradition for me as a Meetings Incentives Conferences and Exhibitions (M.I.C.E) professional who organises learning and development events, seminars, conferences and Public Relations (PR) Packages designed to advance Africa.

As I arrived OR Tambo I felt a bond of sorts with the energy I noticed at the Meetings Africa stand an expression that all Africans should deploy daily regardless of our nationality we are ONE Africa.

All Africans should see events that encourage our unity as a needed commodity this is why I am pleased to be looking forward to BOND DAY at Meetings Africa, Interacting with several persons and professionals in the meetings and tourism industry.

Inspiring, in conclusion, is the meaning of bonding: "join or be joined securely to something else, especially by means of an adhesive substance, heat, or pressure."

Let us together join forces regardless of the situations that plague our continent, this space that looks like a revolver can only unlock possibilities when we remain in unison= "uni-meaning One" and "son from Song" means united in one song or voice for our continental good.
Posted by Unknown at 12:24 AM No comments: Links to this post

ABUJOBURG: ABUJA AND JOBURG IS BORN!

Abuja Africa most populous country’s capital –Nigeria built mainly in the 1980s. Located in the central part of Nigeria. It officially became Nigeria's capital on 12 December 1991, replacing Lagos, though the latter remains the country's most populous city. The indigenous inhabitants of Abuja are the Gbagyi (Gwari) as the major language, Mada, Ganagana, Koro, Mada, etc. Abuja's geography is defined by Aso Rock, a 400-metre monolith left by water erosion. The Presidential Complex, National Assembly, Supreme Court and much of the city extend to the south of the rock. Zuma Rock, a 792-metre monolith, lies just north of the city on the road to Kaduna State.
At the 2006 census, the city of Abuja had a population of 776,298, making it one of the ten most populous cities in Nigeria.

Johannesburg Jozi, Jo'burg, eGoli, and Joeys, and abbreviated as JHB) is the largest city in South Africa. It is the provincial capital of Gauteng, which is the wealthiest province in South Africa. The city is one of the 50largest urban agglomerations in the world and is also the world's largest city not situated on a river, lake, or coastline. The city was named and established in 1886 following the discovery of gold on what had been a farm.

Most recently South African Airways' (SAA) launched flights to Abuja, as a second gateway in Nigeria the airline said.
The inaugural flight took off with a contingent of senior government officials and guests on board - proving the local and international popularity of the route.
The flight departed on Tuesday 26 January at 23:55 from Johannesburg via Lagos and landed in Abuja Wednesday morning 07:30.
The flight was greeted with a traditional welcome ceremony as guests entered into Nnamdi Azikiwe International Airport.

SAA's entry points into Nigeria is Lagos, to where it flies daily and now Abuja, with Abuja flight enabling the movement of travellers as well as goods between Southern and West Africa.  The three weekly non-stop flights between Johannesburg and Abuja will operate with modern Airbus 330-200 aircraft, offering SAA Business class luxury and Economy class comfort, with the latest  in-flight entertainment content.
“What better way to celebrate the New Year and 2016, which promises to be a great year for continued growth on the continent, by adding a second point in Nigeria – one of the most popular and profitable routes in the SAA African route network. Introducing Abuja adds more travel options for our customers, especially for the business community, and enhances our footprint on the continent,” says Aaron Munetsi, SAA Acting Chief Commercial Officer.
Returning to South Africa after this super-good launch leaves me looking forward to my next trip to Abuja where I do business, speak, coach and offer PR services for projects towards the advancement of this special continent am most delighted to be a part of for life. I am an African. 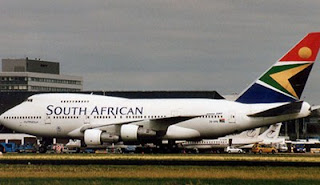 Posted by Unknown at 7:46 PM No comments: Links to this post